In 1980 most of the big civil engineering diving work sites were diminishing a bit in Belgium and I decided therefore to return offshore where the activity was at its highest.

I placed a phone call to Marseille and 2 days later was in a plane for Nigeria.

Up to now, I had only worked offshore in the North Sea where everything was always well organized from home to the arrival on board.

Here it was not exactly the same and it took me 4 days and a lot of problems to reach the barge.

The barge was the old rusty ETPM 101. Everything on board from the accommodations to the food was a real disaster, even in the cabins we had to take care not to be attacked by the numerous rats that had found refuge on board. 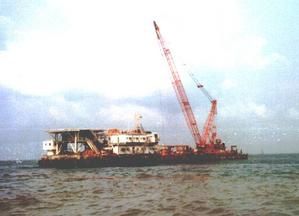 Nevertheless, despite these drawbacks, the atmosphere on board was very good.

When I arrived on board, the diving team was busy since a few weeks to recover the wreckage of a jack up that had sunk some months earlier following a blow up disaster. Most of the dives consisted to go down and fasten a sling to all the big debris that we found.

As some of you know, visibility in the Nigerian waters is often very poor, and is reduced to nil near the shore or in front of the Delta River.

On the 7 September, most of the big pieces had been recovered and we were now busy to pick up all the drill strings.

Weather was not too good and there was a 10 feet swell, but anyway, it was my time to go,

Whenever I found some debris, I fixed my search line to it, asked the surface to lower the crane sling along the down line and then move the crane on my behalf in order to bring the cable above the steel piece.

This time, I had found 3 drill strings. They were lying close to each other and so I decided to hook them all at the same time.

Because of the swell, I asked the crane to give more slack in cable to be sure that I could attach the tubes without any risks for my hands.

Once this was done, I ordered the surface to slowly stretch the cable.

It came up slowly but after a few seconds I could feel that some of the slack was entangled somewhere in another debris, thus I immediately stopped the maneuver and decided to follow the cable to free it.

Because the lack of visibility I couldn't see what happened next, but at once the sling came free from his debris and the loop  hooked itself behind my KMB 10 emergency supply valve, then the cable tightened because of the swell and suddenly... my band mask left his normal position to make a 120° turn on my head.

What I did next is not difficult to imagine, make a (very quick) prayer in order that my umbilical was clear, and back to the surface as quickly as possible.

Luckily for me, Denis the supervisor immediately noticed that I had a problem and after a few seconds I could feel that I was pulled up by the umbilical.

By chance, during my ascent I managed to put my band mask more or less back in position and opened the free flow entirely which gave me a water/air mixture that I think saved my life.

Once at the surface, I immediately dumped the KMB 10 to take a full breath of air.

Some seconds later, I was on deck and off course the supervisor wanted me to immediately go to the DDC and follow a blow up treatment.

As up to now my surface time was less than 3 minutes, and as I was alright, I told him that I preferred to go back immediately, so I had a quick look at the mask to verify if everything was still alright, put it on my face and jumped in the water to finish my job.